Clarence E. Macartney served as Pastor of First Presbyterian Church in Pittsburgh from 1927-1957. “Come Before Winter” was Macartney’s best known sermon. Macartney preached the sermon the first October of the ministry in Pittsburgh. The church elders asked that the pastor preach it each year, which he did.

Dr. Arnot Walker, when a student in the Jefferson Medical College, heard Dr.
Clarence E. Macartney preach a sermon on the text, “Do thy diligence to come before winter” (2 Tim. 4:21). The text continued to linger in his thoughts as he sat in his room. He decided, “I had better write a letter now to my mother. Perhaps the winter of death is near for her.” He wrote to her and expressed gratitude for her exemplary Christian life. Two days later while he sat in class a telegram was given to him. It read, “Come at once. Your
mother is critically ill!” Hurriedly he went to the country home. His mother was still living. A smile of recognition and satisfaction was on her face. Under her pillow lay a treasured possession – the loving letter her son had written her after the Sunday service. It had cheered and comforted her
as she entered “the valley of the shadow of death. (Knight)

Whatever we need to do for Jesus and others, let’s do it now -- before winter
comes!

Did I Count with My Kids?

When parents look back, the most important thing will be, "Did I count with
my kids?" Did we do everything possible to help them spiritually, emotionally, and physically?

The culture evaluates success so differently. Do the children love the Lord
and serve Him today? Long ago Hezekiah showed visitors from Babylon everything in his house. What did they see in the King's house?

I pray the presence of the Lord will be sensed when anyone sees our home. Fathers who lead and mothers who love will do the greatest good today. "As for me and my house, we will serve the Lord!"

Jesus Rose From the Dead

This Sunday, let’s all gather to remember that Jesus rose from the dead.

The miracle of the resurrection meant that Jesus died a real death but the body did not see decay. On the first day of the week when the women returned to the tomb to anoint the body of Jesus, the women discovered that the body of Jesus needed no anointing for He had risen without corruption.

Because Jesus rose – death, the devil, and sin are defeated. The resurrection is the victory that gives believers the same victory in Christ.

The resurrection wrought transformation in the lives of the early believers who saw Jesus alive. We too have the same blessing, though having not seen with our eyes, we know, believe, and love Him.

Wiersbe related, “R. W. Dale was preparing an Easter sermon when the truth of Christ’s physical resurrection burst in upon him with compelling power. ‘Christ is alive!’ he said aloud; ‘He is alive – alive!’ He began to walk about the room saying to himself, ‘Christ is living! Christ is living!’ Not only that following Easter Sunday, but for months afterward he exulted in the theme of the resurrected Christ. He even began the practice of having a resurrection hymn sung each Sunday morning just to remind the people that they were worshiping a living Christ.”

I Believe in the Resurrection of Jesus Christ!
(John 11:25).

I Believe in the Hope of Eternal Life
(Titus 1:2)

You have to believe

“You have to believe in happiness,
Or happiness never comes.
I know that a bird chirps none the less
When all that he finds is crumbs.

You have to believe the buds will blow,
Believe in the grass in the days of snow.
Ah, that’s the reason a bird can sing,
On his darkest day he believes in Spring.

You have to believe in happiness—
It isn’t an outward thing.
The Spring never makes the song, I guess,
As much as the song the Spring.

Aye, many a heart could find content
If it saw the joy on the road it went,
The joy ahead when it had to grieve,
For the joy is there -- but you have to
believe.”

The 21 days of prayer offer all of us an opportunity of spiritual adventure with the Lord. It will be a devoted time to offer ourselves at God’s disposal to teach and lead us. Please avail yourself to every time possible.

This Sunday I will teach the PRAYER FOR SPIRITUAL AWAKENING SEMINAR. You will receive a manual to help in the teaching time. This will be an enjoyable time of study as we launch the 21 days.

E. M. Bounds said, “God shapes the world by prayer.” Here is one of my favorite “prayer stories” told by Bounds: “George Benfield, a driver on the Midland Railway, living at Derby, was standing on the footplate oiling his engine, the train being stationary, when his foot slipped; he fell on the space between the lines. He heard the express coming on, and had only time enough to lie full length on the ‘six-foot’ when it rushed by, and he escaped unhurt. He returned to his home in the middle of the night and as he was going up-stairs he heard one of his children, a girl about eight years old, crying and sobbing. ‘Oh, father,’ she said, ‘I thought somebody came and told me that you were going to be killed, and I got out of bed and prayed that God would not let you die.’ Was it only a dream, a coincidence? George Benfield and others believed that he owed his life to that prayer.”

When the saints enter heaven, multitudes will discover the prayers that got them to heaven. 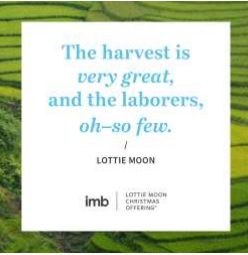 Every Church. Every Nation.

It’s more than a catch phrase. It’s at the core of what we do. We believe every church—and every church member—has a critical role to play in bringing the gospel to the world. Your church’s participation in the Lottie Moon
Christmas Offering is a key part of that.

Because you and your church give to the Lottie Moon Christmas Offering, IMB
missionaries can take the gospel to unreached peoples around the world. Every dollar you give makes a difference, because 100% of the money collected goes to the work of reaching every nation.

The Story of Lottie Moon

In the 1800s, a missionary named Lottie Moon wrote letters from China urging
American churches to fund more overseas workers. After Lottie’s death on the mission field, an offering was started in her name. The offering was established to empower international missions efforts for Southern Baptists.

As We Serve During November

In this month of Thanksgiving, let me be thankful to God for all the volunteer work for
the Lord that goes in to a month like this. To think of your labors of love in these many
activities gives me great joy.

Phil. 1:4. Always in every prayer of mine for you all making request with joy,

How can we pray for those who will go through Judgement House this week? Here is an acrostic provided by NAMB.

The acrostic HEART will help one remember what to pray.

I look forward to Sunday with the story of the conversion of Paul.
See you then!